Four Weddings and a Kiss

"If at first, the idea is not absurd, then there is no hope for it."
- Albert Einstein 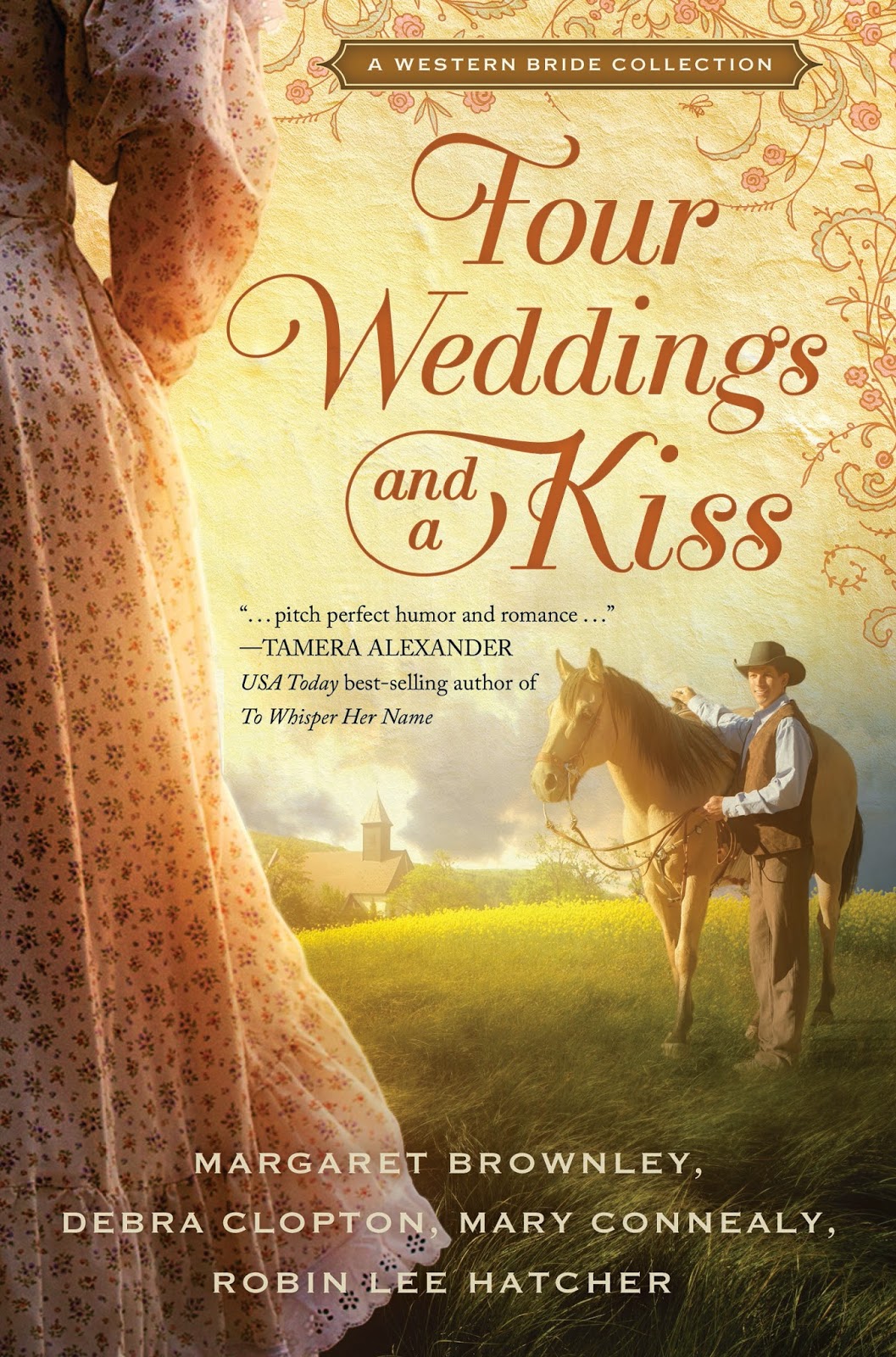 How do four authors living in different states, with complicated writing schedules and individual writing styles come up with an idea for a new collection?  They brainstorm and that's what Robin Lee Hatcher, Mary Connealy, Debra Clopton and I did via a conference call one memorable day.

After batting a few ideas around, Robin suggested we do something with unlikely brides.  It seemed like a good idea and after some discussion we knew we wanted the collection to be about women who found true love despite failing to meet certain social standards.  That's a theme that many can relate to and we knew it was an idea worth pursuing.

As any writer will tell you an idea is nothing more than a tiny seed. Once you have this seed in hand you must then go after your story, sometimes with a sledgehammer. That’s what Rod Serling called the bleeding part.  After the phone call, we pretty much had to sling the proverbial mallet by ourselves.  Here's how the four of us came up with our stories:

Margaret Brownley on writing Courting Trouble:
When I put down the phone following our conference call a woman in jail flashed through my head—don't ask me why.  What I didn't know is what she was doing there. It's questions like this that keep me awake at night.  Being in jail didn't necessarily make her an unlikely bride
unless . . .

She killed her husband—or at least was accused of killing him.  Would that make her an unlikely bride? What if two husbands had died under mysterious circumstances? Three?  Ah, the mind boggles!

Debra Clopton on writing A Cowboy for Katie:
I needed an unlikely heroine for our premise and I thought of Crazy Cora from the movie Quigley Down Under and I had always adored that character and her damaged heart and knew that I wanted to create a character similar in some way--my heroine Crazy Katie Pearl immediately appeared in my head, talking to herself and hoping she didn't have to shoot a cowboy. I loved writing this character and the whole A COWBOY FOR KATIE story.

I've had the idea for Spitfire Sweetheart starring wild child Maizy MacGregor for a long time. I picture her, reckless as can be, harming a man and having to care for him by way of atonement. (In other words, she owes Rylan Carstens big time for the harm she's done). Maizy's got a good heart and she's been raised like a boy, so it's not really her fault. And when she meets a man who reminds her she's truly female and he's shocked and upset by the way she conducts herself, in true Maizy fashion, she causes a lot of trouble. So much trouble in fact that only True Love can overcome it.

NEW YORK TIMES BEST-SELLING AUTHOR MARGARET BROWNLEY has penned nearly forty historical and contemporary novels. Her books have won numerous awards, including Readers' Choice and Award of Excellence. She's a former Romance Writers of American RITA® finalist and has written for a TV soap.  She is currently working on a new series.  Not bad for someone who flunked eighth grade.  Just don't ask her to diagram a sentence.

Thanks for visiting with me today, Margaret. I'm looking forward to reading this book written by some of my favorite authors. What fun it must have been to work together.

If you'd like to know more about this book and others by Margaret, visit her website. You'll be glad you did.

Leave a comment with your email address and answer one of the questions below and you may be the lucky winner of a copy of this book. Sorry, US and Canada residents only. Winner will be announced next Sunday, June 22. If you're a follower, you will receive one extra entry.

QUESTIONS: What is your favorite book by Margaret?
What kind of books do you like to read?
Posted by Martha W. Rogers at 2:00 AM

I have not read any of Margaret's yet. I love to read Christian historical fiction.
Campbellamyd At gmail dot com

Just wanted to drop by and say a big hello to everyone. Thank you Martha for letting me visit this week!

Hi Martha. Thanks for featuring the book. I SURPRISE prize, huh? Intriguing!!!! :D

Thanks for sharing! Although I've only written nonfiction, I enjoyed hearing how the ideas and characters were conceived.

Thanks for sharing about this new collection! I've only read a couple of Margaret's short stories (in the Christmas anthologies--one of my favorite kinds!) but look forward to adding to my TBR!

I loved this post. My favorite book is "Dawn comes Early" and I like reading all types of books. Here is my is my email in case I win....

Hi Martha! I've read so many books I had to stop and see which one of them was Margaret's. :) I know I've got Gunpowder Tea waiting TBR on my kindle, (Love that title by the way. :) ) and I think I've read A Lady Like Sarah. Would love to read this newest story.

Thanks for sharing how this book was born, Margaret. Sounds like a great read. :)

Hi everyone (waving!) Hi Martha, thanks so much for having our book here on your blog.

I haven't read any of Margaret's books yet, but I visited her website and all her books look good. I like historical fiction and suspense.

This sounds like an exceptionally fun novella collection. I especially enjoy books by Mary and Margaret. I'm less familiar with Robin's and Debra's books. Thanks for this behind the scenes look at this book and for the chance to win Four Weddings and a Kiss.

Great post! I love Gunpowder Tea. I know Four Weddings and a Kiss will be great.

Hi Martha! My fave kind of books to read are Christian fiction with a bit of a suspense/mystery thread. I also love the historical fiction genre as well!

Thank you for sharing this great post! I love each of these authors and am so excited about this collection! I always enjoy Margaret's books and Gunpowder Tea is one of my favorites!

I am a follower.
texaggs2000 at gmail dot com

It's so good to see all of you dropping by. I love Margaret's books, and I think my favorite of hers is A Lady Like Sarah. That heroine just resonated with me somehow, and I loved her.
Haven't read Gunpowder Tea yet, but plan to do so.