Forgiving As He Forgave Us

Thank you for stopping by and helping me celebrate my birthday on June 22.

Spring Hope is the story of my journey to forgiveness with my brother. Forgiving seems to be one of the most difficult things for Christians to do. Jesus told us it is something we must do as we are forgiven by Him. I’ve read so many books lately with forgiving as one of the main threads of the plot. The threads range from forgiving someone who has hurt the character in the past to forgiving someone of going against everything a Christian holds dear.


Jesus doesn’t care how small or how great our sin is. A white lie or fib is as big a sin as murder because there are no degrees of sin. We are all guilty, and Jesus forgave us with His life, so how much more should we be able to sacrifice our feelings and forgive another person.


My hero followed the same path of forgiveness that I took with my brother nearly thirty years ago. I was in my forties and for years had denied I even had brother because of his lifestyle and numerous imprisonments from Texas to Kansas to Georgia. My fear lay in the fact that I didn’t want my Christian friends to know about him because they might think less of me.


Coming face to face with my own sin of being unforgiving opened my eyes to truths I had denied for many years. Once my eyes were opened, peace came and the love I had for my brother as a child returned. God forgave my brother who became a Christian in prison, and I had to forgive him, too, or make a mockery of my own Christianity.


Yes, hurts do run deep, and forgiving takes much more than many of us want to give. We have no choice because Jesus gave us a commandment that we must follow or be disobedient. Let us open our hearts and let His love flow through us as we forgive others who have sinned against us.


My brother is still in prison, but he is a redeemed child of God, and I love him.


My prayer is that as you read Spring Hope, you will draw closer to the Lord as you think of people in your own life who may need your forgiving heart. 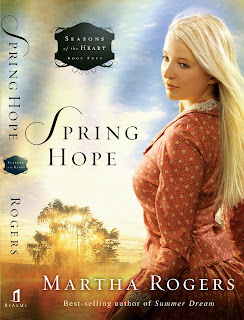 Libby Cantrell’s life has gone from bad to worse since her mother’s death. With an abusive father, and life in a brothel, she sees no hope for her future until she gains the courage to make her escape one cold winter night.


When she arrives exhausted, hungry, and ill in Portersfield, Texas, Sheriff Cory Muldoon finds her in an alley and takes her to a doctor. Against Cory’s better judgment, Seth and Erin Winston take her in and offer her a job as a nanny for their young son. As a minister, Seth sees it as his duty to take care of the young woman. As a deputy, Cory sees it as his duty to find out the truth about her even as he is attracted to the waif of a young woman. An unexpected late winter storm and an accident at the river brings the two of them even closer.


As his love for her grows and winter becomes spring, will he be able to accept her as she is now and truly forget and forgive her sordid past?


Set in the late 1800s, Seasons of the Heart weaves together the stories of four women whose great faith make a difference in the lives of the men they love. The series moves from Connecticut to Texas as it follows the lives of these women and their families as they find true love and bond in friendship only God could orchestrate.

Answer the following question for an opportunity to win a birthday gift from me including a copy of the book and a Starbucks Gift Card.
Why is forgiving others so difficult thing for Christians?
P
Please: US and Canada only. Leave your email address so you will be notified about winning. The drawing will be after midnight on Friday, June 22.

AFTER ALL One you don't want to miss

Once again Deb Raney takes us to Hanover Falls, the scene of a tragic fire that took the lives of five heroic firefighters. Susan Marlowe mourns the death of her husband, Pete Brennan carries the weight of the death of four of his men and one woman in the fire, and Andrea Morley must mourn the loss of her closest friend in the fire without the right to mourn him.


Raney weaves a story that reveals secrets which affect the lives of all concerned. She gives us characters who tug at our heart, make us angry, and give us hope. The twists and turns of events will keep you turning the pages to see where the next turn takes you. The last in the Hanover Falls series, Deb Raney wraps up the stories of the firefighters and their loved ones who have overcome loss to regain hope and forge a future that draws them closer to God and brings them great joy.


After All begins eighteen months after the tragic fire. Susan Marlowe mourns her husband, but is finally beginning to heal until she discovers a secret her husband carried to his grave. Pete Brennan is the fire chief who continues to believe that somehow he could have prevented the tragedy. Andrea Morley mourns David Marlowe, but does so in silence because he was someone else’s husband.


As Susan contends with the knowledge of David’s relationship with Andrea and the behavior and attitudes of her sons following the death of their father, she finds support in Pete who is rebuilding the team at Station 2. As these two grow closer, they learn lessons in love and forgiveness that only God could teach.

Although this is a stand alone, you will most definitely want to read the other two books in the series after you read this one.

Answer the following question and enter your name into a drawing for a Barnes and Noble giftcard so that you may purchase your own copy of Deb's book or any one of her others.

If you have read other books by Deb, which one touched your heart the most and why?

If you haven't read any of her books, tell us about a book that did touch your heart and why.