A Visit with Pam Hillman

I'm delighted to be hosting Pam Hillman on my blog this week.
Here's all about Pam. Her interview is posted after her bio. See the great giveaway at the end. 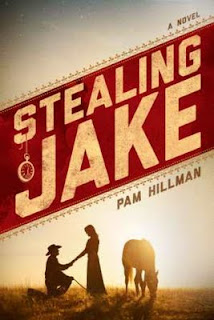 Pam Hillman Bio:
Award-winning author Pam Hillman writes inspirational fiction set in the turbulent times of the American West and the Gilded Age. Her debut book, Stealing Jake, won the American Christian Fiction Writer’s Genesis contest and was a finalist in Romance Writers of America’s prestigious Golden Heart contest. She lives in Mississippi with her husband and family. www.pamhillman.com

Stealing Jake Blurb:
When Livy O'Brien spies a young boy jostling a man walking along the boardwalk, she recognizes the act for what it is. After all, she used to be known as Light-fingered Livy. But that was before she put her past behind her and moved to the growing town of Chestnut,Illinois, where she's helping to run an orphanage. Now she'll do almost anything to protect the street kids like herself.

Sheriff's deputy Jake Russell had no idea what he was in for when he ran into Livy--literally--while chasing down a pickpocket. With a rash of robberies and a growing number of street kids in town--as well as a loan on the family farm that needs to be paid off--Jake doesn't have time to pursue a girl. Still, he can't seem to get Livy out of his mind. He wants to get to know her better . . . but Livy isn't willing to trust any man, especially not a lawman.

Interview Questions: Pam Hillman
1. Tell us how this story came about.

Tyndale House Publishers used to publish 2 Heartquest anthologies a year. Tyndale has been my dream publisher from the beginning, and I submitted novella proposals several times trying to break in. Stealing Jake (then Stealing Jake’s Heart) was one of those submissions. Tyndale put out guidelines for a Cowboy Christmas anthology, so the story had to involve Christmas and have a historical setting. Stealing Jake didn’t make the cut for the anthology, but I loved the idea so much that I went back to it later and turned it into a full-length novel. It just happened to be the novel my agent and I were shopping when word went out that Tyndale was launching the Digital First Initiative.

I honestly can’t remember how I came up with the exact idea for the pickpocket theme, but it was the old adage of opposites attract. If she’s a thief, he’s a lawman. Okay, she’s a reformed thief…or is she? lol

Sounds like fun, Pam. My first novel, Becoming Lucy, was also a reject from the Heartquest anthologies. Sometimes rejection can be a good thing in the long run.
2. How long have you been writing on this novel?

I proposed the story several years ago as a novella, then put it aside to work on a different manuscript (Marrying Mariah that was a 2004 Golden Heart winner), then I worked on a couple of other ideas in that series, among other things. Then I came back to Stealing Jake and finished the rough draft in 2007. It came in around 75,000 words. Then in 2010, I revised it, dug deeper into the plot, and added Luke’s pov. At that point, the story solidified and everything…clicked, if you know what I mean.

3. How did you come up with your characters?

I hear something, see something, even smell something, and it gets me to thinking. I daydream about that while I’m driving down the road. Sometimes those thoughts dissipate with the wind, and I never remember them. But the gems come back again and again, and those are the ones that get put in the idea folder. It’s pretty sad (or interesting, I suppose) that on a still night I can hear the long, mournful whistle of the train as it passes my mother’s house about four miles away, and immediately I can conjure up a hobo down on his luck hopping off the train. All he wants is a little work in exchange for a bite to eat. But he comes upon an old farmhouse full of kids with an elderly grandfather at death’s door. Not knowing what to do, he starts taking care of the kids and the old man, and the chores around the farm. Then their aunt shows up a week later…. Oh, where was I? We were in the middle of an interview, weren’t we? Sorry about that….next question, please!

4. Are you a SOTP writer or a plotter with outlines?

I’m a plotter…to a certain extent. I get an idea, sometimes it’s a character or an incident. (Uh, see question #3) At that point, I open an excel spreadsheet and start typing thoughts for what might happen. Brainstorm some. Do some research. Just let the idea percolate. I throw one-liners into the spreadsheet. Anything goes at this point. I might even ask the Seekers or some of my other writer friends for input. But I don’t want too much input at this point. I’m easily swayed! Eventually, the idea gels, and I start to get the backbone of the story. The subplots, character motivation, layers, and even the geographical location might change as I build the story, but this “backbone”, or premise, pretty much stays the same. Once that’s in place, I write the first few chapters, and that reveals more about the characters and the story, so I plot some more. So, I’m a plotter whose plot constantly changes. How’s that for being concise?

LOL, Pam. I’m a SOTP writer who starts out with an idea, a beginning and an end then I write to see what will happen in the middle.
5. What do you like or not like about writing historical?

I like pretty much everything about writing historicals. I love the research. Sometimes I have to rein myself in, or it steals my time away from actually writing. I love the look and feel of old things, trunks, hatboxes, old houses. Louis L’Amour was my favorite author as an early teen. I’d say that the only thing I don’t like about writing historicals is that when I’m researching something very specific on the internet, I get frustrated when I get six million hits. What’s accurate and what’s not in this internet age?

Research can be frustrating with so many different ideas on some subjects, but it’s fun when you stumble on just the right one.

6. How much research did you have to do for this story?

A lot of historical writing comes from years of reading historicals and soaking in historical facts. Some things are just second nature. But when I get to a spot that sends up a red flag, then I research. Since Livy is a pickpocket, I researched a bit about street kids in Chicago in the late 1800’s. Then when I chose the location for the story, I found that the area was coal mining country, so that added another layer to the story. And I needed a railroad nearby and a creek. So, even though the town is fictional, it’s “South-Southwest” of Chicago, generally speaking.

7. What brings you the most joy in writing?

Creating the story. Just seeing it all come together. And when I can give a double-whammy twist at the end of a story, I’m in hog heaven! Hannibal Smith, A-Team leader, sums it up perfectly, “I love it when a plan [book] comes together.”

8. What are three things people wouldn’t ordinarily know about you?

I was a tomboy growing up, and was my daddy’s righthand “girl” until I married. I can cut, rake, and bale hay, or drive 40’ cattle trailer to the stockyard if needed. I’m a purchasing manager (my predecessors were all men) for an OEM company where I purchase tons of stainless steel, pumps, motors, relays, and solenoids all day long. And I know the difference in a Phillips and a flathead screwdriver, and that 26 gauge stainless steel is a lot thinner than 14 gauge, which is weird when you think about it!
Readers can click here to read “Daddy’s Girl” http://calicotrails.blogspot.com/2011/07/daddys-girl.html)

Oh, my, I would never have guessed it. I’m such a tomboy myself only mine was in sports. I busted my knee playing flag football with a bunch of boys when I was 14.

9. What or who has helped you most in your writing?

A must for those pursuing a career in writing Christian fiction is American Christian Fiction Writers. Join! Besides ACFW, hands down it is the Seekers. They are the 14 sisters I never had, and I can’t imagine life without them. They are there for me in thick or thin, good times and bad. In addition to my Seeker sisters, Robin Caroll is one of my best friends. I don’t know what I’d do without her.
ACFW is really important for fiction writers, and good writing friends are one of the greatest blessings.

10. How does it feel to have that first book under your belt and in publication?

Amazing! After working for years toward publication, it feels a little unreal to actually see Stealing Jake on Amazon, to read the reviews of strangers and how much they enjoyed the book. Knowing that somebody really, really enjoyed my book and wants to read another one makes me want to do it all over again.

11. Where can readers find out more about you?

My website is http://www.pamhillman.com/ and I hang out with the Seekers at http://www.seekerville.blogspot.com/

It's great to learn more about you. I have to echo you about ACFW--a must if you write Christian fiction. I enjoyed your interview and look forward to reading your book.

Martha, thank you for having me on your blog. I appreciate your hospitality, lady!

Martha, thanks for featuring Pam -- she is truly a gifted writer!! I started reading Stealing Jake last night, and was so tired I expected to only read a chapter or two and ended up a hour or so beyond that and expect to do the same tonight. WONDERFUL story, Pammy, but then no surprise there, my friend.

You have an amazing story, Pam. Thank you for sharing!

Sherri, thanks for stopping by. Hope your day is filled with joy and happiness. Share that beautiful smile with everyone you meet!

Stealing Jake sounds like a great story. Congratulations on lengthening your novella into a novel Tyndale bought! I'm looking forward to reading.

Ann, so glad you stopped by. Thank you!