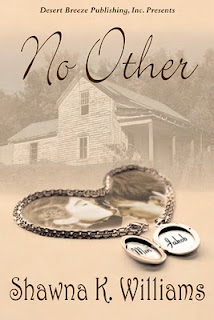 In No Other, Shawna Williams has given us a love story that will tug at your heart and bring a tear to the eye. Jakob and Meri are teacher and student, but because of circumstances created by the war, Jakob is just now completing his schooling so he and Meri are near the same age. Jakob is dealing with the injustices inflicted on his family because they are German, and Meri is struggling to gain independence from her parents. The two are drawn together as they work on a drama Meri is putting together for a school production.  Meri knows nothing about the faith in God Jakob expresses and isn’t truly interested in finding out. The growth of their love and the circumstances around it lead to events neither anticipated and points out the fact that even a strong faith can lapse in a moment of weakness. A wonderful cast of secondary characters gives this story life and meaning that goes beyond our expectations.
Shawna's Journey to E-publishing

The journey to publication is a winding, long path, unique to each author and different for every book. I guess I'm a bit fanciful in my pondering, but I like to imagine a book's journey, and ultimate destination, is something guided from above; tailor made for the story being told, and in essence, part of the book's story itself.


If you've read some of my previous guest posts, you may be aware that my debut novel, No Other, and my newest release, In All Things (No Other's sequel) were originally inspired by a dream. Before that dream I hadn't intended to be a writer. The dream was a unique story that became somewhat of an obsession, turned compulsion (to write), and then transformed into a deeply seeded passion. That's the short version, anyway.

Before I continue, I have a confession to make. Though my story, which became stories over time, was Christian fiction, before seeking publication I didn't read Christian fiction. I read mostly non-fiction, primarily historical, and several favorite secular authors – Tom Clancy and Tess Gerritsen to name a few. Beth Moore and Max Lucado were the two Christian authors that I read on a regular basis. Still, I knew I wanted to write Christian fiction. I had this story to tell!

While studying and researching, learning what it took to get published in the CBA, I came to understand that I was faced with a dilemma: shelf these books and write something else, or rewrite them (again) to exclude certain topics. I knew the second choice was something I couldn't do. For one, without those topics there wasn't much of a story. Second, I honestly felt that to have attempted it would have been disobedience on my part. I truly believe that the stories God gave me were a gift. They had a message and they served a purpose. I wanted that to be my reason for writing, not writing to get published. Though, I reminded God often that the published part would be nice too.

So that left me with option number one, which was okay if that's what God intended. Actually, I looked at it like this; if it was what He intended then I could go ahead and submit while working on another story (which comes out in December, btw).

From the moment I started looking into publishers something about a small press appealed to me. It may simply be that my husband and I have always been small business owners, and there is a joy in it that's hard to describe. I compiled a list of presses and agents that I wanted to query and decided to give agents who accepted email queries a try first. I sent my submission to eighteen of them. Sixteen rejected me based on the query, but I did get a couple of nice, encouraging letters in response, so it wasn't all bad. I had two agents ask for a partial and a synopsis.

The idea of an agent reading the synopsis freaked me out a bit because a synopsis is dry, and she'd read that there was a pregnancy out-of-wedlock and a student/teacher affair. While she'd know the setup, she wouldn't know the emotional complexity involved, and that neither of those things were glossed over or excused in any way.

While waiting to hear from agents I starting looking at the small presses on my list. There were several that held a strong appeal to me, but they were closed for submissions. I became aware of Desert Breeze through Michelle Sutton, who had a book about to release with them. What I liked was that this press was looking for Christian stories that tackled some of life's issues that a number of other Christian presses did not, as stated within their guidelines. That sounded a lot like my book. I have another small confession, though. When I initially submitted I did not realize that they were only publishing in electronic form. Not sure how that escaped me, but it did.

And I am SO glad!

I discovered this oversight several days later, and I won't lie, I debated withdrawing my submission. I really wanted my book in print. But... what was the harm in seeing what happened. My husband agreed. I used this waiting time to read a few books published by DB, learn about e-publishing, chat with DB authors through their loop, email a few to ask more personal questions, and Google the rest of them. It seemed that DB's owners were putting together a promising company.

When Gail offered me a contract I was still nervous. I prayed every day until the contract arrived, "God, if this is a bad idea please tell me because otherwise I'm going to sign it." The more I prayed, though, the more at peace I felt. By the time I'd signed I was so excited that I couldn't tell anyone about it without jumping up and down and squealing like a five year old girl.

It's been fifteen months since signing the initial contract and a lot has happened. Desert Breeze is continuing to grow. Digital publishing is taking the industry by storm. While I'd still like to see my books in print, the need isn't there. Every major book chain has an e-book division – the most recent being Christianbooks.com (DB has a contract with them). A number of new e-readers have hit the market and prices continue to plummet. One year ago a Kindle 2 was $300, now the Kindle 3 is $139. Point being, it's getting easier and cheaper to read an ebook in a convenient, comfortable fashion. My books are able to be shared. As of next month, I'll have three of them out there.


Leave a comment below and be in the drawing for a pdf. file copy of this book as well as a locket that ties in with both books, but we can mail only to United States. Thanks for stopping by
Posted by Martha W. Rogers at 8:15 AM

Hi, Martha. Thank you so much for hosting me. :)

I would love to win this book and the locket - I am a jewelry diva!!

I loved your post, Shawna. Prior to being signed with DB I worked with a professional editor who kept telling me that my stories would not fly in the Christian market place. "You need to get off the fence," she told me. Either go ABA (where she said my stories whould fit) or CBA. I struggled with this for a long time and ended up following my heart. I'm so glad I did. One of my best reviews to date came from a pastor's wife who read 'No Greater Love' and absolutely loved it despite the fact my characters were very human :-).

I enjoyed your interview, Shawna. It sounds like an engaging book that will tug at your heartstrings.

I just loved your post and would love to win your book or locket. Both sound wonderful!

Your book sounds great. I also enjoyed reading about your journey to publication with DBP. Thanks for sharing~

Great post, Shawna. I love my Kindle and I have noticed more and more people are purchasing ebook readers. So much easier to carry my small Kindle than lugging several books around. And so nice to make the print larger if I want on my Kindle. I bet a lot of people will be getting them for Christmas presents with the lower prices now.

And so true if you write outside of the box, you have trouble getting Christian books published with the big houses. They have so MANY restrictions.

SHAWNA--a wonderful testament about your road to publication. I thoroughly enjoyed it. Me? I am a closet Inspirational reader. yes, it's true, I always say, "I don't read Inspirationals," and what do I have right now? Beverly Lewis's newest Amish story. I love Deanne Gist, too.
Ny calling is not to write them, though. I know that for certain. Congratulations on the wonderful review and the success of your books. Celia

I purchased and have read No Other. It was definately one of those books that had me up late wanting to finish it! I will admit to being surprised at the "realness" of the characters, but it is true that none of us are perfect. I admire the way the characters handle the consequences of their actions. I would love to read where the story goes!
Sue Foster

It is funny when you write outside the box, how they reject you....
martha(at)lclink(dot)com

Thanks for dropping by everyone. Sorry I'm so late, but haven't been near my computer since early this morning. The winner of Shawna's book is Sue Foster.