Call of the Prairie

Call of the Prairie

Sophie Davenport has always been "sickly" and confined to limited activities. Heavily protected by her parents and longing for a way to escape her constricted life, she jumps at the chance to travel to Kansas to take care of an ailing aunt. Imagine her surprise to find a run-down house, an aunt in worse health than thought, and five school children in her charge. It's enough to cause an asthma attack and that attracts the attention of Josh Harper, banker and uncle of two of the children under Aunt Maud's care. Because of her petite size, Josh can't see how Sophie will manage the care of the house, her aunt and the children. She begins to wonder the same when she finds mysterious holes in the wall and stairway as well as strange happenings in her pantry.

Sophie's efforts to prove Josh wrong leads to some merry adventures including advances from charming and delightful scoundrel Wade Barnes. With wonderful characters who grab the heart, Vickie McDonough gives the reader a story that will lead to laughter, tears, and some frustration as Josh grows to admire Sophie. But will he be too late and lose her to Wade? Vickie throws in a few surprises along the way that will delight the reader and leave them wanting to know more of the story in the days following the last page. 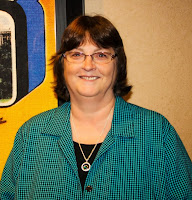 Vickie McDonough grew up wanting to marry a rancher, but instead, she married a computer geek who is scared of horses. She now lives out her dreams in her fictional stories about ranchers, cowboys, lawmen and others living in the western 1800s. Vickie is the award-winning author of 29 published books and novellas. Her books include the fun and feisty Texas Boardinghouse Brides series, and End of the Trail, which was the OWFI 2013 Best Fiction Novel winner. Whispers on the Prairie, which released last July, was chosen by Romantic Times as one of their Recommended Inspirational Books for July.


Vickie is a wife of thirty-eight years, mother of four grown sons, one daughter-in-law, and grandma to a feisty seven-year-old girl. When she’s not writing, Vickie enjoys reading, antiquing, watching movies, and traveling. To learn more about Vickie’s books, visit her website and sign-up for her newsletter:
www.vickiemcdonough.com

Leave a comment today, then come back tomorrow for an interview with Josh Harper and you will be entered in the drawing for a copy of this delightful book. If you are not a follower, sign up and you will receive an extra entry in the drawing.

Hey Vickie and Martha! Just thought I'd drop by and say hello. Hope both of you have a blessed new year.

This sounds like another fun read from Vickie. I love these books.

Thanks, Debbie Lynne & Nancy! Have a great week!

I read Whispers on the Prairie and really enjoyed it. Can't wait to get my hands on Call of the Prairie. I have it on my wish list.
Karen G.
kmgervais(at)nycap(dot)rr(dot)com

Call of the Prairie sounds wonderful. Please enter me in contest. Thank you for the opportunity to win.I enjoy reading your books.

a follower BY EMAIL.

Hi Martha and Vickie,
Love the look of the blog, Martha. And Vickie, I love this: "Sophie's efforts to prove Josh wrong leads to some merry adventures including advances from charming and delightful scoundrel Wade Barnes." Now that's irresistible. :)

Thanks, everybody, for visiting Martha's blog. Good luck in the drawing.

Jillian, I wish I could claim that sentence, but those are Martha's wonderful words.

Martha W. Rogers said...
This comment has been removed by the author.
10:59 PM

I just call them like I see them, Jillian. I had a lot of fun with that story and the review.

Thanks for following me, Emma.

Y'all be sure to come back for the interview with Josh and answer the question for another chance to win this great book.

Check out the interview of Josh Harper and leave another comment for an extra chance to win Call of the Prairie. Good luck, everyone.

Love Vickie's books! Can't wait to read this one
I follow this blog
Thank you
mcnuttjem0(at)gmail(dot)com

I'd love to win this book. My favorite trait in a hero is to be considerate and caring. The alpha type doesn't appeal to me.

My favorite trait in hero is Christan values, loving and caring.
angelachesnut246@gmail.com